This article is informative for all the fans of Akshay Kumar and upcoming sequel of his 2012 film OMG.

As of now, the makers, as well as the actors, are unwrapping the details related to OMG 2. And so, we have collected some important pieces of information related to it! This article would help you to know more about the star cast of OMG 2, its location, the first look, production, and even every single update related to it! So, if you are the one who wants to know all these, then this article is exclusively for you!

According to our sources based on valid and reliable reports,Akshay Kumar is going to show his acting skills by portraying Lord Shiva. Last time, he depicted Lord Krishna.

on 23rd October 2021, Akshay Kumar released the first look of OMG 2! And to add more glitters to this article, we would also like to mention that yesterday itself Akshay Kumar reached the location where they are going to shoot the most important scenes of OMG – “Oh My God” 2.

So, to know more details regarding the location of the sequel of his 2012 film OMG, the below paragraphs are going to be super important as it would serve you the answers to all of your questions.

According to sources the significant scenes of the movie are going to be shot in the Ujjain of Madhya Pradesh. The movie would keep its plot moving around the Idol Shiva, the makers had thought of filming it in the city of one of the twelve Jyotirlingams. Mahakaleshwar Jyotirlinga is unique among them as it is “dakshinamukhi,” which means that it is facing the south

Ujjain has historical significance. Not only in the religious aspect, but it had also witnessed the legacy of science, power, trade, and politics as claimed by the archeologists.

There was a time when this city was the capital of a big empire—ranging up to Arabia, Europe, and Rome, ruled by the first Chakravarti emperor of India, The Vikramaditya!

Following the importance of this city, the makers had decided to shoot its major scenes over here. And according to our sources, yesterday only the lead actors have reported in Ujjain. Over there, they have a 17-day shooting schedule.

In Ujjain, the locations they have selected are as follows. Before calling all the star cast of OMG 2, the makers had visited the city to decide the filming locations. And after a complete tour of the city, they have decided to cover up the scenes at Shree Mahakaleshwar Temple, Kaal Bhairav temple, Ram Ghat, and Tower Chowk in Ujjain

On 23rd October 2021, Akshay Kumar reached Ujjain. Before this on Friday, the makers had already shot the smaller yet important scenes in the older parts of Ujjain, Sita Gate, and some other places in Ujjain, including the Freeganj Tower.

For filming the scenes, sometimes the authorities had also blocked the road from both sides. And to avoid any kind of nuisance from the people, the police force was also posted over there. Some of the scenes were also shot at the Datta Akhara and Ram Ghat. Along with Ujjain, some scenes are also planned to be shot in Indore.

And as now Akshay Kumar, with the other lead cast of OMG 2 have reached the location, very soon the other significant scenes will be shot. But what about the cast of OMG 2. Who all are the part of this sequel? Let us know

Leaving the main star of the film, many of the new actors have paved the way in this sequel. Unlike the first part, this time, Paresh Rawal would not be part of this sequel. But this doesn’t mean that this part would be deprived of legendary actors. Along with Akshay Kumar, the other lead cast of OMG 2 are as follows-Starting with the lead female actor.

This time, the actress who bagged this role is the beautiful and talented Yami Gautam. Another lead actor who paved the way is Pankaj Tripathi. Last time another legendary actor, Mithun Chakraborty, was also a part of the cast. But this time, it seems that he also would not be a part of OMG 2.

Originally, the first part was directed by Umesh Shukla. But now, the second part, or can say its sequel, is directed by Amit Rai. So, we can aspect some changes in the way of the filming of its sequel

Akshay Kumar with Pankaj Tripathi while shooting in Ujjain

the plot of the second part of the highly successful film OMG is going to be interestin As per the reports, the first part had tried to expose the religious discrepancies veiling under blind faith! But this time, the plot will witness the overall twist. This time, the producer and the director are trying to demonstrate the problems prevailing in the education system of the country. ‘

Moreover, the makers would also try to give possible solutions to improve the overall system. Along with this, the plot of OMG 2 will also provide a way to build a bridge between the dreams of the youth and their destination! So, overall we can hope that a major socially impactful movie is paving its way towards us.

And now, Akshay Kumar had already released the first look of OMG 2, which had potentially increased the interests of the fans of this legendary actor.

The first look of OMG 2

On 23rd October 2021, Akshay Kumar had unveiled his first look from OMG 2 via his social media handle. He posted two posters of the upcoming sequel of his 2012 film OMG. In the first poster, we can see two hands. One is of a human, and the other seems to be of Lord Shiva.

The first poster shows that lord Shiva is holding the hand of a man. In its base, we can find a beautiful line saying that if you are a follower of Shiva, then you should believe in him! 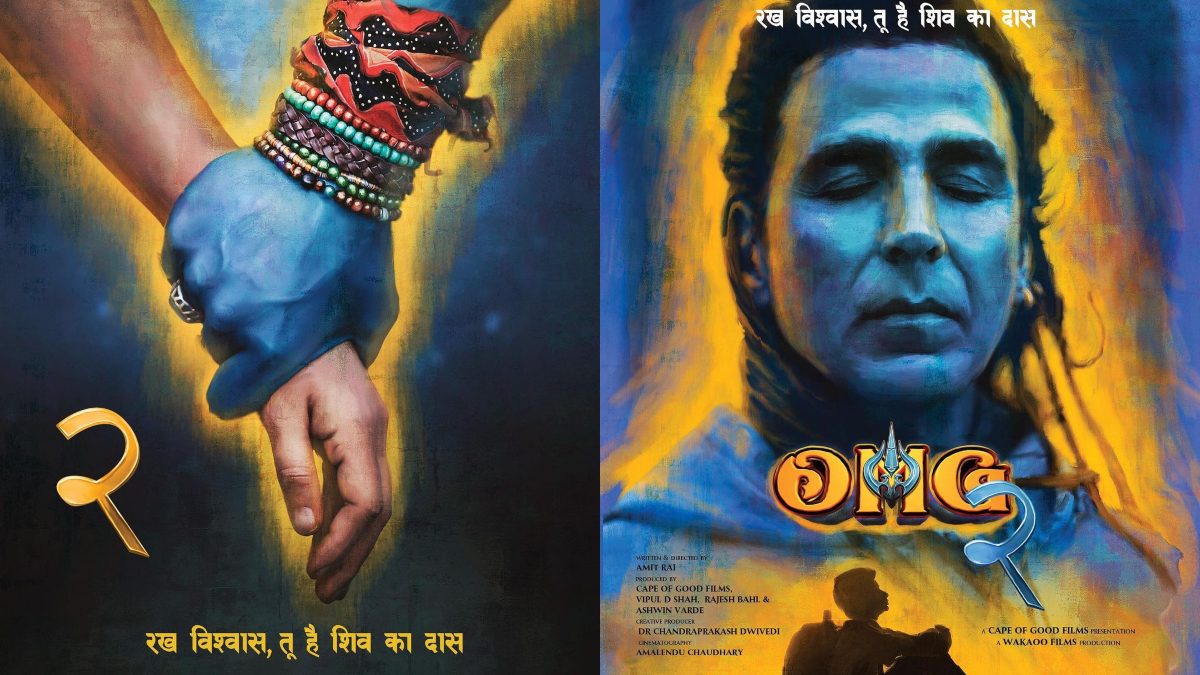 The second poster reveals the first look of Akshay Kumar from the film OMG 2. It clearly depicts that in this part, he is going to show his acting skills by portraying Lord Shiva. The poster shows Akshay Kumar with long hair as Lord Shiva. Moreover, to make his look even more real, he was painted in all blue, as same as the deity.

The poster also included other important details related to the production and filming committee. Like about the writer and the director. It was mentioned on the poster that OMG 2 is written and directed by Amit Rai.

On the right-hand side of the second poster, it was written that it is a Cape of Good Films presentation and a Wakaoo Films production. Akshay Kumar shared these two posters with a beautiful caption. At first, he wrote some lines in Hindi.

If translated, then it means that if the doer can’t do it, Shiva can do it. Then he asked for the blessings and wishes for his upcoming movie OMG 2.

He further wrote that this film is their honest and humble attempt to reflect an important social issue. After this, he ended his lines by wishing for the eternal energy of Adiyogi to bless them throughout this journey.

Glimpses of shooting in Ujjain

that he and his friend Pankaj Tripathi have come to a place that is both the beginning of the Universe as well as it is also the place where the Universe departs, which is Ujjain!

And they have reached the city of ascetics to seek the blessings of Lord Mahakal, who is the lord of the beginning and the Eternity.